The Hammers made multiple efforts to take the attacking midfielder, but were left disappointed in the end.

Vanaken later confirmed the Jupiler Pro League side turned down a bid made by the London club and Club Brugge even made efforts to secure his long-term future, which they did by offering the 28-year-old a contract until 2025.

The Belgium international’s father, Vital Vanaken, was also a professional footballer. The latter has been interviewed by Het Belang van Limburg, with the results published in today’s newspaper.

Barring his time in PSV Eindhoven’s academy, Hans spent rest of his playing career in Belgium.

Vanaken Sr was quizzed whether his son’s career would be incomplete without a move abroad. When responding to it, Vital revealed the serious approach made by West Ham.

“A few months ago, there was interest from West Ham. Serious thought was given to this. But for such a step the whole picture has to be right. Financial, sporting and family-oriented,” Vital said.

“At Club Brugge, he plays for trophies every year, [but] not [with the] English mid-table club. That’s point 1.” 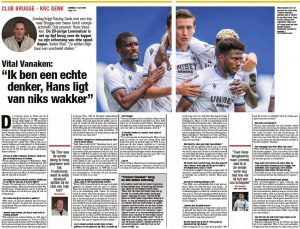 “Two, he and his wife Lauren are very happy. Do you have to go abroad, just to be able to say “I have been there”?

“I don’t rule out that he ever goes abroad. But suppose it doesn’t happen. Is that a lack of ambition?”

Hans had earlier only confirmed about the approach made by West Ham, while his father has now revealed the player gave ‘serious thought’ to the Premier League side’s proposal.