Liverpool were determined to sign Jérémy Doku in 2018 and had invited the forward and his family to Merseyside, where he even held talks with Jürgen Klopp and Sadio Mané.

Anderlecht convinced the winger to snub the Reds, and former Everton man Romelu Lukaku partly played in role in helping the Belgian side stop the player going to Anfield.

The forward’s father wanted his son to join the Premier League winners, but he decided not to make a move to England.

Liverpool renewed their interest in the Belgium international last summer. However, Klopp failed to sign Doku, and Vincent Kompany’s side sold him to Rennes on deadline day in October.

Het Nieuwsblad interviewed the player and asked him what was his thinking when he decided to join the Ligue 1 side since ‘Rennes is not Liverpool’.

“I did a lot of research first, wrote down all the positive points and only then did I make a decision,” he said.

When further quizzed what were the positives, Doku explained: “I knew that I first wanted to make an intermediate step. Going to a top club now would be too soon. I still have a lot to learn and Rennes is the ideal place for that.

“They play the Champions League, it’s a good team that plays in a good league. You feel that there is a difference in level with Belgium. There’s also more famous and better players.

“Memphis Depay, Houssem Aouar, Angel Di Maria. These are men you will not meet in the Jupiler Pro League. I feel that I have taken steps in several areas.

“In the past, for example, I was often good on the left, but it was a bit harder to do my thing on the right. At Rennes I often play on the right flank. And okay, it is still not my favourite position, but I do feel that I am becoming more flexible.” 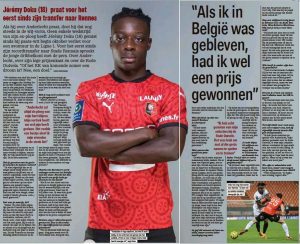 The teenager is yet to score a goal for the Ligue 1 side and Doku’s comments indicate he sees Rennes as a stepping stone to help him get a big move in the future.

Liverpool could come back for him if he manages to impress at the French club.