At a press conference this week, Nottingham Forest manager Martin O’Neill gave a hint saying Diogo Gonçalves could be leaving the club at the end of the season.

With the player being loaned from Benfica, the boss said the Championship side have no buying option over him, so his stay wouldn’t be in their hands.

“He is a player who is here on loan at the moment. Benfica may well want him back next season and we would have no option about that,” said Martin O’Neill.

Now as the Portuguese press reacts to the quotes today, they confirm that Gonlçalves’ continuity at Nottingham Forest is very unlikely. 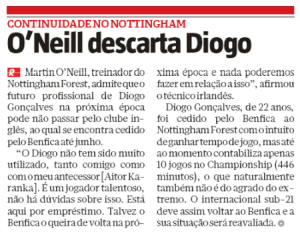 A Bola writes that Gonçalves was loaned to Forrest to ‘gain playing time’, but that isn’t exactly happening as he has only ten Championship appearances so far.

They say the lack of game time ‘does not please him’, and he should be evaluated once he returns to Benfica in the summer.

Newspaper O Jogo, who also covers the story, adds that Nottingham Forest actually do have a buying option over the player.

So maybe the Championship side don’t even consider it right now, or someone is misinformed.