The former Barcelona player’s contract with the Premier League club will expire at the end of the season and Takvim say he’s an option for the Super Lig side.

It’s reported Comolli will sit down and hold talks with Pedro’s agent in the near future and that Fenerbahce are very serious about bringing the Chelsea player to Istanbul at this stage of his career.

The 32 year old has been an important part of the Chelsea squad since arriving from Barcelona, but Frank Lampard now has other options ahead of him with the likes of Callum Hudson-Odoi, Willian and Christian Pulisc competing for places. 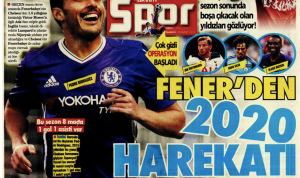 According to Takvim, Fener are eager to get a deal done for him.

Pedro’s future was recently questioned by the Spanish media, with it being reported he was considering a return to his home country.