Lyon president Jean-Michel Aulas heralded a new era at his club in the summer, bringing in former players Juninho and Sylvinho as sport director and coach respectively.

It all lasted less than three months. With the French club 14th in Ligue 1, and losing to local rivals Saint Etienne at the weekend, Aulas pulled the plug on Sylvinho.

That means they’re again looking for a new manager. In the summer, Mikel Arteta was one of those linked with the position.

Pep Guardiola’s assistant at Manchester City has found himself of interest to several clubs over the past year, but has so far chosen to stay with the Premier League champions.

There’s little point swapping learning from Guardiola and working with the top quality system at City for a few months elsewhere, and he perhaps thought Aulas wasn’t the right boss for him.

Tuesday’s edition of L’Equipe looks at the options Aulas now has, and for Arteta it’s said 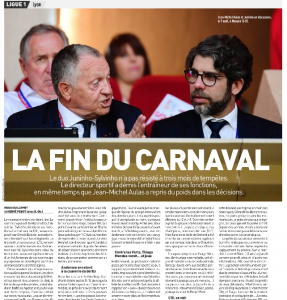 to be ‘difficult to imagine’ that Lyon would try again. That’s perhaps because they want a manager with a little more experience.

Laurent Blanc is put forward as a strong possibility, and former Manchester City player, also former New York City manager, Patrick Vieira is said to be appreciated by some at Lyon.

Vieira is currently managing Nice, who are ninth in Ligue 1.