With both Manchester United and Tottenham in turmoil, the manager rumour mills are in full force, and there’s one name that keeps popping up: Max Allegri.

It makes sense, since he’s probably the biggest name on the free agent market not called José Mourinho, and since the Old Trafford club have already gone through *that* experience, he’s the likeliest candidate to take over if the Glazers and Ed Woodward decided to pull the plug on Ole Gunnar Solskjaer.

We’ve covered it from the Spurs angle, as Il Tempo claimed he was ‘in pole’ to replace Pochettino in London, yet Gazzetta dello Sport seem to suggest it’s Manchester United that would intrigue him more should that prospect become available.

They explain Old Trafford is a destination that ‘greatly fascinates him’, but don’t go into much more detail.

As for whether he would come out of his sabbatical to take over a team mid-season, Corriere dello Sport said that would not be happening last week, but Gazzetta believe he might be swayed. 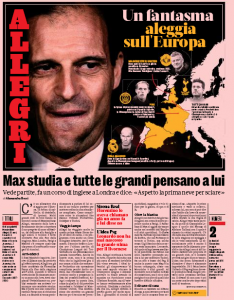 They explain those who know him well don’t think he can ’stay on his sofa without working for that many months’, even if he is currently waiting for the first snow so he can go ski (per his own quotes).

That means that if Manchester United or Paris Saint-Germain (who are also reportedly interested, but aren’t anywhere near in as precarious of a position as the Premier League side) want Allegri, they will have to make a move in the ‘next few weeks’ because the idea of him taking over a team in December or after is ‘highly improbable’.

The clock is ticking…