In the run up to the Champions League matches against Liverpool, the press closest to Real Madrid were very respectful to their opponents.

As ever there references to The Beatles crowbarred in at any opportunity, and whilst it was made clear Jurgen Klopp’s side have been having a poor season, the impact of injuries on that was repeatedly explained for a Spanish audience.

Things started to change a little after Klopp’s comments about playing at the Estadio Alfredo Di Stefano rather than the Bernabeu, and the manager apologised for any offence he caused.

Then, on Wednesday evening, the Real Madrid team bus was attacked as it carried the players to Anfield, breaking one of the windows. That action has received a backlash, with Mundo Deportivo, actually a Catalan leaning newspaper, making clear their disgust at the situation.

Firstly, it’s explained how around 4000 fans gathered around Anfield, with ‘flares, few masks and no safety distance’, which is described as a ‘bad recipe’ in these Covid-19 times.

The newspaper insists images like that should not be seen right now, and go on to say images of ‘violence’ should never happen.

Then Mundo state: ‘The Real Madrid coach was stoned upon arrival at Anfield. They broke a window. Fortunately, there was only material damage to regret, although that cannot excuse the despicable behaviour of a few. An incident that is unfortunately not new in Liverpool. In 2018, City also suffered a similar attack in the Champions League. Guardiola 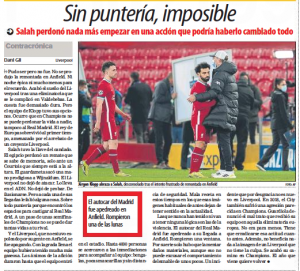 denounced the bad treatment his team received in that European tie. They have to eradicate that attitude as soon as possible. Furthermore, it does not benefit the image of a Liverpool that is not to blame.’

Liverpool quickly released a statement after the incident, saying they’d work with Merseyside Police to identify those responsible.