That brave choice worked out for the Spaniard and he became a hero at the Croatian club and ended up the subject of interest from around European football. RB Leipzig won the transfer race in January 2020, and Olmo set about establishing himself in the Bundesliga.

This season the 22-year-old midfielder has made 40 appearances for Leipzig, across all competitions, and has scored eight goals and added 11 assists. A regular under Luis Enrique, the midfielder scored two goals for Spain during the last international break, helping raise his profile further in his home country.

Barcelona rumours were inevitable, and Thursday’s edition of Sport reports the club have never lost sight of their former player. There’s been ‘serious contacts’ during Bartomeu’s tenure, and those contacts continue. 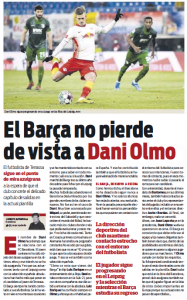 Olmo is aware is he’s on Barcelona’s wish list, and the Catalan club know the player is also of interest to others.

There’s no talk of an imminent swoop, this is just one the Blaugrana are keeping on the back-burner, potentially going in for the kill in a coming window.