Each week, Italian newspaper Gazzetta dello Sport pick out a selection of the best performers from around Europe.

They ignore their own Serie A in the process, and there’s usually three or four players from the Premier League included.

This week, English football clearly hasn’t impressed them as much as usual and there’s only two from the PL in there.

Those are Everton’s Bernard, who scored and impressed against West Ham, and Crystal Palace’s Patrick van Aanholt, who did the same against Huddersfield Town.

Van Aanholt scored Crystal Palace’s second, in the 88th minute. A goal which extinguished the hopes of Huddersfield and sent the Terriers to guaranteed relegation to the Championship. 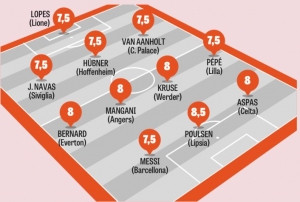 The 28 year old Dutchman isn’t often included in selections like these, so it’s a nice nod for his good performance.

Van Aanholt has 31 Premier League appearances so far this season, with two goals and two assists over those games.