When Jan Vertonghen moved from Ajax to Tottenham Hotspur in 2012 he received a pay-off from the Dutch club. Like other Eredivisie teams, Ajax had to find creative ways to reward their players financially.

Ajax simply didn’t have the ability to pay Vertonghen big wages so came to an agreement he would receive a payment if he attracted interest which led to a relatively big transfer. That was a carrot for the player financially, compensation for receiving lower wages than he could get elsewhere, and motivation to do well and attract big clubs.

Vertonghen did his bit and Tottenham swooped in. The defender paid the 45% income tax on his payment from Ajax, but then the club were also ordered to pay 75%. Meaning that if the figure had been €1m, Ajax would have had to shell out €1.75m in total. 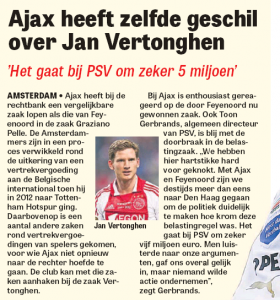 The tax rule was brought in by Dutch authorities to combat bankers getting excessive severance packages and being rewarded for failure. With Vertonghen going to Tottenham it was clearly different, the footballer was being rewarded for success.

Dutch clubs have been in a battle to get the tax rule changed and Dutch newspaper De Telegraaf report Feyenoord have struck a blow, which is a bonus to their fellow Eredivisie clubs. A court has ruled the 75% tax, levied on Feyenoord when they paid Graziano Pelle a similar exit bonus, goes against the European Convention for the Protection of Human Rights and Fundamental Freedoms.