Towards the end of the winter transfer window Leicester City were linked with a move for Celtic defender Erik Sviatchenko. At the time the Dane had no intention of leaving Celtic and that broadly remains the same, despite losing his place to Dedryck Boyata.

Sviatchenko is frustrated with the situation but rather than talking about a quick exit, he’s instead told Danish media BT he’s prepared to fight. The 25 year old wants to prove Brendan Rodgers wrong and is putting as much effort into training as he can, determined to change the situation.

Should he still be a substitute come the summer then there’s likely to be interest. BT have published a big Sviatchenko article as part of the interview and they back up claims of Leicester City interest. BT say that’s according to their own information, and given they’ve been talking to the Celtic player it sounds like they have a very good source. 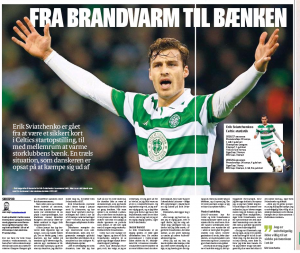 Leicester City wouldn’t have it all their own way if they went in for Sviatchenko in the summer, with BT saying ‘several major clubs’ have been keen.

What happens between now and the end of the season is key. If Brendan Rodgers continues to overlook Sviatchenko then the defender could push for a move, worried that if he spends next season on the bench the interest from other clubs could weaken.