The Mesut Ozil and Arsenal drama continues to be covered by the European sport media. L’Equipe, a French newspaper, often give a lot of attention to Arsenal, and their Sunday edition has a double page spread on the player’s situation.

He was left out of the Gunners’ Premier League squad, which prompted endless rumours about the reasoning, despite manager Mikel Arteta trying to push away questions on the topic.

L’Equipe’s article is mainly what has been said elsewhere, covering the situation and various theories which have been attached to it. However, they have an interview with Laurent Koscielny, and the defender, who left Arsenal for Bordeaux in the summer 2019 transfer window, gives his insight on Ozil’s time with the London club.

Asked what impression Ozil made on him, Koscielny was very positive: “As a man, he’s a very good person, who got along with all his teammates. He gave a lot, helped sick children. He is a generous person, with whom I got along very well. As a player, he is in my opinion a phenomenon. He can find passes that no one sees, he’s a maestro. He can rock a game with incredible passes.”

The defender went on to say Ozil always had time for children, playing football with them in the dressing room after Arsenal matches. He’s ‘friendly’, ‘pleasant’ and always available for a chat.

On what may have changed since he left the club, Koscielny said: “We’re both part of the ‘Arsene Wenger Generation’. The coach loved him as a player. It was more complicated with Unai Emery and Mikel Arteta. Knowing him, he must always be professional in 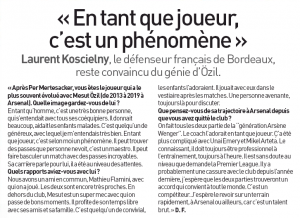 training, always on time. He is undoubtedly at the level demanded by the Premier League. There is probably a certain case with the club since last year, I hope both sides find a deal that works for everyone. He is a competitor. I hope to see him back on the pitch soon, at Arsenal or elsewhere, because he is real talent.”