Louis Ducruet, the nephew of Prince of Monaco Albert II, is expected to join Nottingham Forest.

The 27-year-old stepped down from his post as a vice-presidential advisor at AS Monaco in July and had also confirmed he’s looking for a “new adventure” and a “new challenge”.

Having started in the Ligue 1 side’s commercial department, he went on to be part of their recruitment team before becoming assistant to AS Monaco’s vice president in February 2019.

Monday’s edition of L’Equipe explains Ducruet ‘will join’ Nottingham Forest as a ‘senior advisor’ and will sit on the Championship club’s board.

It’s claimed unnamed clubs from Switzerland and Belgium ‘approached’ Ducruet, but he decided to join the English side because he found the “best compromise” and “optimal working conditions” with Nottingham Forest. 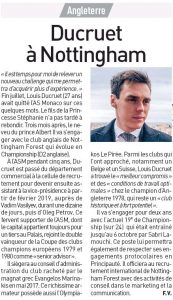 Ducruet will sign a two-year contract and regarding his role, L’Equipe adds he will ‘work in the international recruitment of Nottingham Forest with consulting activities in marketing and communication’.

According to the newspaper, Ducruet’s new role at Nottingham Forest will also ‘allow him to meet his protocol commitments’ in Monaco.