Chelsea star Willian is a free agent this summer.

The winger’s decision not to commit his future to the Blues has seen him heavily linked with clubs in England and abroad.

On Monday, Sky Sports reported the Brazilian has offers from Barcelona and MLS side Inter Miami, while the Blues have tabled a renewal proposal. Arsenal are also keen on signing him.

It was explained the La Liga side have ‘fulfilled’ the 31-year-old’s request of a three-year contract.

Journalist Miguel Rico has responded to the claims made in the British media, in today’s edition of Mundo Deportivo.

According to Rico, Barca’s technical leadership has ‘ruled out’ signing Willian on a free transfer this summer because of the ‘unacceptable salary’ demanded by the attacker. The journalist, however, doesn’t specify the exact figures requested by the player. 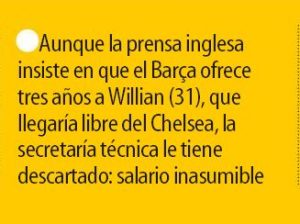 Meanwhile, reports coming from Europe and South America have stressed the Chelsea wideman is set to join Arsenal on a free transfer.

ESPN Brasil journalist Bruno Vicari reported on Monday the Gunners are hoping to announce Willian’s signing ‘in the coming days’.