When Paul Pogba returned to Manchester United after his spell at Juventus, the slogan used on social media was #Pogback.

It worked well, with everyone getting behind it, but what followed was a series of ups and downs for the Frenchman, as performances never quite met the expectations, at least on a continuous basis.

That’s why, over the past couple of years, we have seen a number of rumours, sometimes fuelled by the player himself or his agent, about a move elsewhere, mostly to Real Madrid.

However, there is another club would like to have Pogba in their ranks, and that’s Juventus.

During his first stint with the Serie A club, the Manchester United midfielder became something of an icon, and while the fanbase understood why their club had to sell him, they never stopped hoping he would one day return.

That’s what Gazzetta dello Sport look into on Tuesday, explaining that even those behind the scenes at Juventus are in favour of a potential move.

The Italian newspaper write that Fabio Paratici, Juventus’ CFO, ‘would be happy to bring the Octopus back to Turin’ but he knows ‘it won’t be an easy or cheap task’. 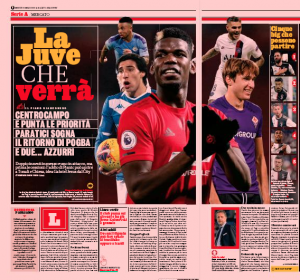 Gazzetta reckon it would cost around €110m to convince Manchester United to let their prized asset go, and that’s before the Serie A champions have to then pay his €15m/year salary.

For Maurizio Sarri and his midfield woes, they explain Pogba’s arrival would be the ‘cure all’, as he offers physicality, quality and goalscoring ability, but first, before any of this can happen, Juventus need to sell.

Sami Khedira and Miralem Pjanić are seen as the two most viable sacrifices, with the hope the latter can bring in around €60-70m.

That seems like wishful thinking to us, as does the prospect of convincing Ed Woodward to sell Pogba, but in these dire times, we can allow a bit of (perhaps deluded) optimism.