Sevilla are worried, explain Marca in a small article in their Monday edition.

The Spanish club are hearing claims of Ever Banega potentially joining Arsenal this summer and are working out what they can do about it. Sevilla wouldn’t want to sell the midfielder but given he has a release clause of €20m it’s not really in their hands.

Sevilla want to meet with Banega when Argentina’s participation in the World Cup ends and explain to him all about the club’s future project and how he’s an important part of that.

As has now been mentioned in several reports on the player’s future, it’s stated Banega is unhappy with the exit of sporting director Oscar Arias, which is where the real possibility of an exit probably started. 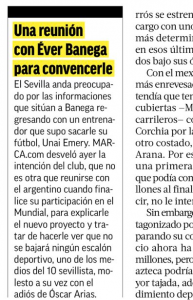 On Sunday we covered claims from Estadio Deportivo, a local Seville newspaper with good connections, that explained Unai Emery is trying to tempt the player to move and it was even reported the Arsenal manager has telephoned him.

The previous claim that Banega’s representatives had held a meeting with Arsenal in London was dismissed as being untrue.