Dominic Solanke very much needs a loan move away from Liverpool this month, unless there’s a very quick plague of attacking injuries at Anfield.

The 21 year old isn’t getting a look in and will be eager to get games to help his progression, it’s why he left Chelsea and things haven’t quite gone to plan this season.

This week’s edition of German magazine SportBild has a big feature on the player and Schalke interest. It’s explained that whilst Solanke isn’t getting time under Klopp, he’s first choice at Schalke as they look for winter additions.

The club are going through another ‘crisis’ and Solanke is seen as someone who can ‘save the season’.

Schalke would be looking at a loan until the end of the current campaign, when they’re considering an effort to sign Paderborn’s Philipp Klement.

To get a deal over the line, there’s some hope Klopp would help the German club, having long standing friendships with some who work on transfers there. 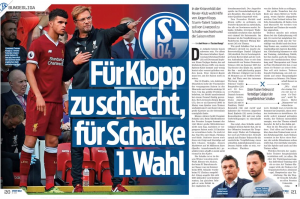 SportBild suggest Solanke could be Schalke’s Paco Alcacer type signing, after the former Barcelona player did so well when he joined Borussia Dortmund.

It already sounds like a lot of pressure for the 21 year old, and Schalke has proven to be the type of club which can severely turn against players if they don’t fulfil expectations. Klopp will know that, and take it into account.