Having joined Fortuna Düsseldorf on loan from Watford, Dodi Lukebakio has been one of the standout players for the German side.

The forward has 10 goals and three assists to his name in the league and has netted on four occasions in cup competition.

Out of the 10 goals, four of them came against Bayern Munich, which includes a hat-trick in November. This was when he caught the attention of the German media and reports have linked him with a move to other Bundesliga clubs.

On April 24th, the Belgian gave an interview to SportBild, where he admitted his representatives will evaluate and examine the options in the summer and then decide what’s best for him.

Thursday’s edition of Kicker claims Fortuna Düsseldorf could see Lukebakio and Benito Raman [Burnley are interested in Raman] – another star player with nine goals and five assists – leave the club in the summer.

Regarding the Watford owned player, the report claims Fortuna tried to sign him on loan for one more season. 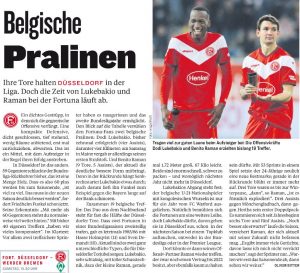 However, their chances of keeping him look unlikely because Fortuna believe Lukebakio will join a ‘top club’ in the Bundesliga or Premier League this summer.

His contract at Vicarage Road expires in 2022.