Although the Manchester clubs get more mentions in the race for Sporting midfielder Bruno Fernandes, some Portuguese outlets continue to say Chelsea and Liverpool are alive in this battle.

Newspaper O Jogo adds the Blues and Reds today to the list of clubs who should take part in the ‘auction’ for the 24-year-old in the summer.

Atletico Madrid, Chelsea, Manchester City, Manchester United, Liverpool and PSG would be waiting for the end of the season to make their moves for Fernandes.

O Jogo writes that when signing the player from Sampdoria on a €10m deal in 2017, they didn’t expect such a rise. Now the midfielder is valued at €35m at least, and protected by a €100m release clause. 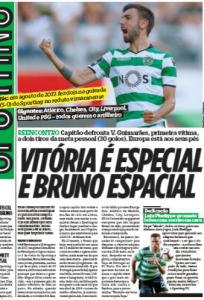 Bruno Fernandes has 28 goals and 15 assists in 48 games for Sporting this season, and these stats make it highly unlikely he will stay in Lisbon for the next season.

It’s surprising to see O Jogo mentioning the €35m figure, since that’s a number used by Transfermarkt, but the expectation is that he leaves Sporting for much more than that.