Luyindama reportedly has admirers from the Premier League with Aston Villa, Wolves and Everton linked with him recent weeks. The Super Lig club’s other senior central defender Marcao has been linked with a move to Serie A side Atalanta.

According to Fotomac, this situation has led Galatasaray to looking for alternatives, and the Tottenham player is reportedly a target for them.

It’s stated Gala have made their first contact with Vertonghen and they are ready to offer a two-year contract to the 33 year old, said to be worth €2m per year, a figure likely to be after tax. 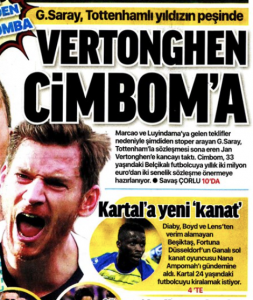 Vertonghen’s contract with Tottenham will expire at the end of the season, and he’d now be free to speak to the Istanbul club about a pre-contract agreement.

Since the arrival of Jose Mourinho the Belgium international has seen himself in and out of the Tottenham side, and looks set to leave this summer.