Bayern Munich, Manchester United and Inter Milan are interested in Real Madrid’s Achraf Hakimi, according to AS.

The 21-year-old has been on loan at Borussia Dortmund since 2018 and has impressed for them. This season, he has nine goals and 10 assists to his name in all competitions.

It’s claimed Bayern are ‘serious’ about the Morocco international and he remains one of their priorities in the next transfer market.

The Bavarian club are ready to make a ‘strong financial’ offer, both to the player (salary around €6-7m net per year) and the La Liga side.

Los Blancos are convinced with Hakimi’s performances, but their project doesn’t seduce him. That’s because he will have to be a substitute for Dani Carvajal at the Madrid club.

Zinedine Zidane’s side are aware of Bayern’s interest first hand because the relation between the two clubs remain ‘fluid’.

According to the report, Manchester United and Inter are also ‘willing to bid’ for Hakimi, and he’s ‘seduced’ by the prospect of the English club. Ole Gunnar Solskjaer’s side remain a strong rival for Bayern, mainly because they can match the terms offered by the Bundesliga winners. 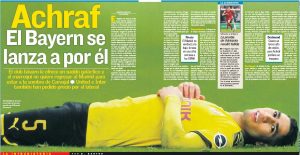 A move to Old Trafford doesn’t make a great deal of sense, given the options the club already have. They’re stocked at right back, right wing-back, and if they’re looking for a right winger then it’s likely they’d choose another option.

Manchester City were linked by the Spanish media on Monday, and this could all be an effort to help hype the player’s value.