It looks like Manchester City and Paris Saint Germain better hurry in case they want to sign Florentino Luís from Benfica this summer.

That’s because according to newspaper A Bola, the Eagles are planning to offer the midfielder a new deal which could double his release clause.

Even though the player signed a new contract in October, Benfica think it’s already time to extend his deal from 2023 to 2024 and increase his release clause from €60m to €100m or €120m.

A Bola claims that the likes of Manchester City and PSG started becoming interested in the player once he got a place in the Eagles’ starting team this season. They’ve been linked to the 19-year-old a lot in the past few months. 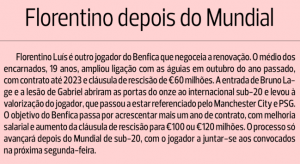 Florentino managed to make 13 appearances for Benfica’s first team this season, and is set to become an important player for their squad.

Since Benfica plan to give him a new contract after the U20 World Cup, which starts later this month, maybe there’s still time for Manchester City or PSG to try to get the player for a cheaper price.