The newspaper claimed that the Eagles first spoke to the Gunners a few weeks ago, and with the London side demanding €15m for the move, they’d now work to drag the price down.

It turns out that a couple of more newspapers are bringing information on this chase as well. One of them is O Jogo, who confirms that Benfica are going seriously for Guendouzi.

They write that the Eagles want to pay upto €10m for the midfielder, and in case the Gunners continue to demand more, then the Portuguese giants would try a loan with an option to buy. 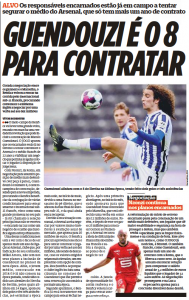 Guendouzi’s contract with Arsenal expires next season, and the loan would only be possible because the Premier League side have an option to extend it for a further year.

O Jogo writes that Benfica are now ‘on the pitch to try to close a deal’. It’s claimed that at the start of the month, when the Eagles started contacts, ‘everything pointed out’ that Guendouzi would go to Marseille, who’d pay around €12m for him.

However, with the French club spending €25m on Gerson from Flamengo, Arsenal stopped believing they were having financial difficulties, and put the price up, making the deal fall apart. That’s where the ‘opportunity window was reopen’ for Benfica, who now have another shot. 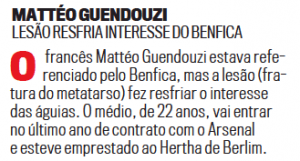 Meanwhile, newspaper Correio da Manhã features a very short story on Benfica’s chase for Guendouzi. They write that the club had the player ‘referenced’, but his recent metatarsal injury made their interest ‘go cold’.