Italian newspaper Tuttosport today features a long interview with Pantaleo Corvino. The official, who currently works at Lecce, had a lot to say about transfer business at his current and previous clubs.

The 71-year-old had worked at Fiorentina, where the likes of Nikola Milenkovic and Dusan Vlahovic have been shining for the past few years. And it turns out he had something interesting to say about the defender.

Quizzed about the Serbian duo, Corvino claims that Manchester United made an official offer for Milenkovic, and that was turned down by La Viola.

“For Milenkovic, in January of my last season at Fiorentina, the Della Valle, and I say it here without fear of being proven wrong, refused 40 million euros plus bonuses from Manchester United,” Corvino told Tuttosport. 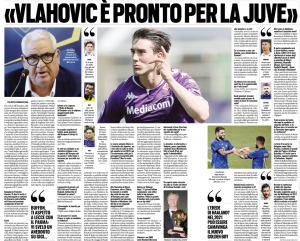 Corvino worked for Fiorentina between the summers of 2016 and 2019, which means Manchester United submitted that offer in the January window of 2019.

A few months later, the Red Devils ended up spending €87m on the signing of Harry Maguire from Leicester City. Still, it doesn’t look like their interest in Milenkovic has ever gone away, since the Serbian player is still often linked to the Old Trafford side.