Wolves played their last home game of the Premier League season at the weekend, and as is tradition the players thanked fans after the match.

Ruben Neves was seen to be emotional, and that inevitably saw claims the midfielder was saying goodbye to fans who have been so good to him since his move from FC Porto.

The Portugal international has been repeatedly linked with a move to Barcelona in recent weeks, however, it’s not been clear quite how the Camp Nou club would pay for him.

Monday’s edition of Sport takes a look at the situation, and it’s stated the Wolves man is one of three options for midfield, along with Real Sociedad’s Zubimendi and AS Monaco’s Tchouaméni.

Neves is said to be the option Barcelona are moving forward with, and that’s because the club have a good relationship with his agent, Jorge Mendes.

Zubimendi is considered to be too expensive with Real Sociedad pointing towards his €60m release clause. That would make one wonder just what Barcelona feel they can get 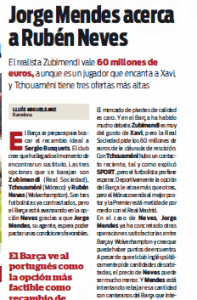 Indeed, it’s stated Neves’ price could be ‘much lower’ than Zubimendi, and that Mendes would try to use Barca fringe players to bring it down further.

That, clearly, doesn’t sound like a great deal for Wolves.