This is it. This is the Inter blitz we’ve been promised, as Piero Ausilio, the club’s director of football, has travelled to London to hold talks with Manchester United for Romelu Lukaku.

Gazzetta dello Sport, after regurgitating the same four lines of copy on Monday, Tuesday and Wednesday, finally have an actual update on the situation, and they go all out.

Spread over two pages, their article explains this is the ‘first official contact’ between the two sides after weeks of ‘negotiating from a distance’, and the aim is to somehow convince the Red Devils that ‘delaying’ the €75m is the best idea.

Inter’s delegation left Milan for destination London on Wednesday afternoon after they decided it was time for a tête-à-tête with the Manchester United board regarding the Belgian striker.

This came after a reunion with Antonio Conte regarding transfer business, who is in a hurry to get his squad together to ensure his preseason goes smoothly ahead of an important season, with Lukaku a priority. 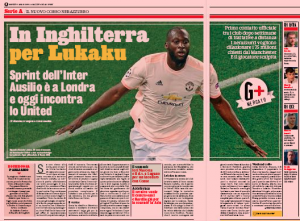 Inter will walk into the meeting with Manchester United knowing full well the player wants to join them, and they’ll be hoping to use that as one of their arguments to ‘defer’ the full €75m payment.

Their idea is to divide the transfer fee into two or three instalments, and the Serie A side might have received a helping hand from Cagliari, who appear open to letting Nicolo Barrella go on a loan with an obligation to buy, allowing the Milan side more leeway for Lukaku.

Gazzetta explain the talks, starting today, could take a while and are likely to be complicated, and it will be important to move ‘with caution’ so as to ‘soften’ the Premier League side’s stance.

For Lukaku, the knowledge this is taking place is making him happy, even if he feels these direct talks should have started last week.

Down his end, as we already know, he has made his side of the matter clear, but without causing a scene.