The goalkeeper’s current deal at Old Trafford runs down in 2020 and the Red Devils’ desire is to secure his long-term future.

While speaking to reporters in Perth, Ole Gunnar Solskjaer was asked about the Spain international and he said, “David has had a summer where he’s been negotiating and we hope we’re going to get it sorted.”

Catalan newspaper Sport now claims the Premier League side have offered a five-year deal worth €20m per season to the former Atletico Madrid man.

If the 28-year-old agrees to sign an extension, he will be the second highest paid player behind Alexis Sanchez.

There’s optimism at Manchester United that their player will commit his future to the club. However, Sport, typically, throw some worry in. 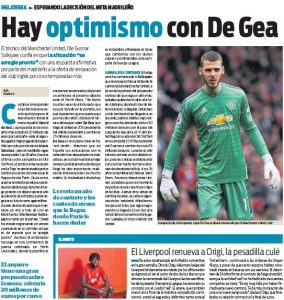 De Gea ‘hesitates’ whether to accept the new proposal made by the 20-time English champions or stay with them for one more season and leave as a free agent next summer.

“There’s an important race” – Victor Orta on his Leeds United...