Sporting are looking to bring some of their former players back in the summer, and that includes both Cedric Soares and Islam Slimani, according to A Bola.

Southampton and Leicester City have loaned the pair out this season and neither have had the experience they were hoping for.

When Cedric arrived in Italy to complete his move to Inter Milan, his smile was so wide his mouth nearly touched his ears, but the whole thing felt like a disappointment waiting happen.

Inter had somewhat used Cedric, and potentially Southampton, by suggesting the possibility of a permanent deal. Within days of the fullback arriving it was made clear in the Italian media that he wouldn’t be bought, and was only signed as a stop-gap.

His 169 minutes of Serie A football tell the story.

Leicester City sent Slimani to Fenerbahce and he’s taken part in one of the worst seasons in the club’s history. They’re still not safe from relegation, and the Foxes owned striker 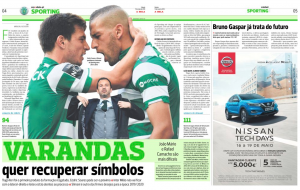 has scored one league goal all season.

Whilst 30 year old Slimani has long had a desire to return to Sporting, it’s probably not the level of club 27 year old Cedric wanted to be interesting this summer.

Sporting will try and get both as cheaply as possible.