Being given the nickname ‘Robin van Persie’ by teammates is a pretty good sign that a footballer knows where the goal is, so can only be a positive for Remi Oudin.

Saturday’s edition of L’Equipe reports the 22 year old Frenchman has a ‘certain efficiency’ when in front of goal, and that’s inevitably seeing the Reims player receive interest from elsewhere.

The clubs who are keen includes Newcastle United and Watford, according to the French newspaper.

Both Premier League clubs have made their interest known, either directly or indirectly, along with Serie A side Fiorentina. Because of this it’s believed Reims can pick up €14-15m in the summer transfer window. 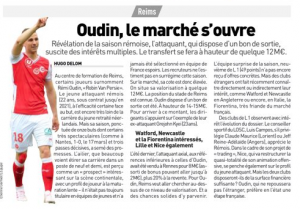 Oudin has 11 goals and three assists so far this season. That’s pretty good considering he plays on the right wing.

Watford and Newcastle often scout in French football, leading to these kind of transfer links. It’s now up to them whether they take the interest any further.