He was at the Gunners until 2017 until returning to the Netherlands with PSV. He’d been spotted by Marcel Brands, who was the club’s director of football at the time, and tempted with the project on offer.

His contract at PSV ends in June 2020, and there’s been some rumours in the Dutch media that the lack of a renewal could suggest there’s something wrong. He’s taken steps to put those claims right, telling De Telegraaf that there’s no problems, he’s just not in a hurry and is sure everything will be fine and he’ll stay.

As with many renewal sagas there’s been insinuations it could be about the 20 year old wanting more money than what’s on offer, but he’s insisted if that was his motivation then he’d still be an Arsenal player. 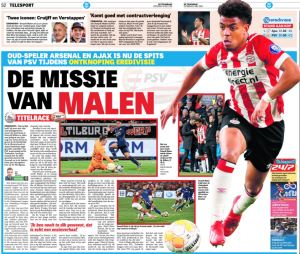 Malen explained: “That I was sent away from Arsenal is certainly not true. I still had a contract for a year and Arsenal even wanted to extend that. I don’t play football for the money. I never did that. Otherwise I would not have left England.”

The winger has made 37 appearances this season, scoring ten goals and adding five assists.