Home Premier League Chelsea Club interested in Chelsea forward – Blues’ demands of €3m loan fee...
SHARE
According to Turkish newspaper Sabah, Fenerbahce are interested in signing Chelsea striker Michy Bathshuayi ahead of the Turkish transfer deadline.
The Yellow Canaries have already strengthened their squad with Vedat Muriqi but Sabah say they are keen to add one more striker to their squad and their target is the Belgium international.
It’s reported that Chelsea manager Frank Lampard is open to let Batshuayi leave the club and Fenerbahce are looking to take advantage of this situation by making a loan offer to the London side.
After a loan spell at Crystal Palace during the second half of last season, the 26-year-old has returned to Chelsea but he wasn’t a part of the match day squad against Manchester United last weekend as Lampard preferred Tammy Abraham and Olivier Giroud ahead of him. 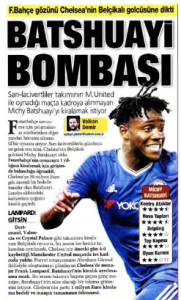 However, Sabah claim Fenerbahce might find it difficult to meet Chelsea’s demands as the Premier League side are looking to get a €3m loan fee for the player and they want his new team to cover all of his wages.