According to Milliyet journalist Serdar Saridag, Turkish giants Besiktas ‘have identified’ Everton’s Yannick Bolasie as a target this summer.

The DR Congo international is out of favour at Goodison Park, with the club having made it clear he has no future on Merseyside, and now Besiktas are keen to take him on loan.

In fact, it’s stated they could make their move for the 30-year-old this week.

The Black Eagles have been linked with a move for the Everton man in recent weeks and it says manager Abdullah Avci is keen to bring him to the Istanbul, further backing up the claim Everton want to get rid. 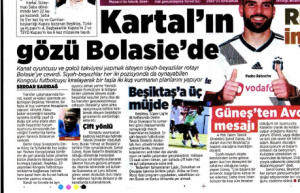 Avci is especially impressed with Bolasie’s versatility as he can play both as a winger and a striker, and thus believes he could be a useful asset to the squad.

Besiktas have also been linked with moves for Southampton’s Mohamed Elyounoussi and Schalke’s Yevhen Konoplyanka but Milliyet believe Everton’s Bolasie is the one who is ‘closest’ to joining the club.