On November 3rd, Sport explained Eric García’s ‘willingness’ to join Barcelona in 2021 is ‘total’ after they failed to sign the Manchester City centre-back in the last window.

Carles Tusquets is the president of the Catalan club’s Management Commission after Josep Maria Bartomeu resigned as the club’s chief in October.

On January signings, Tusquets said: “I feel we should only make a move if a player can come at zero cost. Or if a player is sold in the transfer window, then we could buy.”

Mundo Deportivo journalist Miguel Rico says Tusquets was with Òscar Grau, Ramon Planes and Ronald Koeman on Monday, and he was as clear with them as he was at the press conference the same day.

Should the Spanish side fail to offload any of their players, they will look at plan B to fulfil Ronald Koeman’s specific requests, which is to sign the Citizens defender and Lyon’s Memphis Depay.

Both García and Depay are in their final year of contract, and according to Mundo, Barca have been in ‘almost daily contact’ with their agents so that they ‘feel important’.

The newspaper states the signing of the 19-year-old and the forward depends on their commitment.

Barcelona’s idea is to have them signed for next season at the start of next year and once the contracts are in place, they will open talks with City and Lyon.

If Pep Guardiola’s side and Lyon decide against allowing García and Depay to leave for a minimum fee in the winter market, Barca will then wait for them to arrive at the Camp Nou on a free transfer next summer. 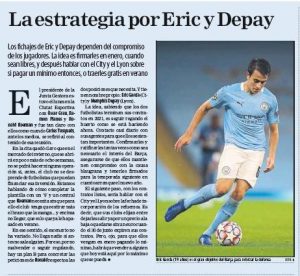 Even if City and Lyon are ready to allow their players to leave in January, Barca must ‘beware’ because they can only make new signings if they manage to sell one or more of their own players ‘for as much as possible’.

To sum it up, Barcelona can sign García in January if City accept a minimum fee and Koeman’s side raise funds through at least one sale.