After being linked for several months, a section of supporters of the Old Trafford club were waiting until deadline day for the Red Devils to bring the winger in.

The Bundesliga side were adamant they needed €120m to allow Sancho to leave the club, but United were reluctant to meet their demands. In the end, the English club were forced to look at alternatives.

Ole Gunnar Solskjaer’s side ended up investing in Facundo Pellistri and Amad Diallo on the final day of the window. The latter will arrive in January.

Dortmund CEO Hans-Joachim Watzke and Bayern Munich chief Karl-Heinz Rummenigge have given a lengthy interview to this week’s edition of SportBild.

When asked if the Covid-19 crisis ensured other clubs cannot afford Dortmund stars like Sancho and Erling Haaland in the near future, Watzke said: “We could have made a big, valuable transfer in the summer, that’s well known (SportBild believe that refers to Sancho to Man United). But we’re glad it didn’t come to this. 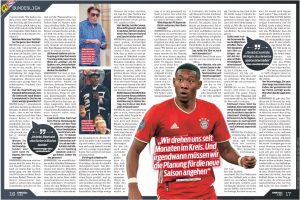 “Of course, we will also implement transfers again in the future, because Corona is clearly throwing us back. Even the biggest clubs are feeling the effects of the pandemic, be it Bayern, Barcelona or Real Madrid.”

“At some point you come to the limit of what you can answer for. You can even see that in Munich right now with David Alaba as an example.”