Home Europe Club hoping Man United will ‘eventually give up’ in sale ‘game of...
SHARE

Tuesday seemed to be a big day in the Alexis Sánchez transfer saga, as the Italian media suggested an agreement had been reached between the player and Inter regarding a potential future contract.

Gazzetta dello Sport were the ones pushing it, believing the Chilean had said yes to a ‘substantial’ contract, which is somewhat echoed by Corriere dello Sport on Wednesday.

The newspaper claim Sánchez has ‘given willingness’ to reduce his wages, and Inter have put a ‘three-year, €7m/year post tax’ contract on the table.

This would mean more than halving his current salary, which is why his agent has asked Manchester United ‘for a severance pay’.

As for the negotiation between the two clubs, Inter have made it clear that they will ‘provide at most a loan with an obligation to buy, but with reduced figures, or a transfer at no cost in the sense that United should leave Alexis free without even one euro’. 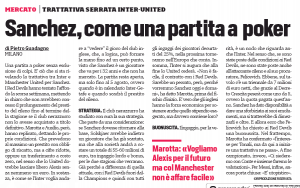 Those are bold demands, and the Serie A club are aware of this, but they want to ‘see the hand’ of the Premier League club in what is being described as a ‘game of poker with no holds barred’.

It’s said Inter have ‘carefully studied their strategy’, taking into consideration the fact Ole Gunnar Solskjaer has ‘already dismissed’ Sánchez from his plans, with the player likely to cost them a total of €55-60m between gross wages and bonuses, especially with 25% extra salary from qualifying for the Champions League.

Basically, they hope that ‘United will eventually give up’ and cut their losses.

The ball is now in Ed Woodward’s court, and it could all come down to how proud the man actually is, since he was the one who agreed to pay Sánchez that much in the first place.

As Corriere point out, Manchester United may ‘have the economic strength to support that exaggerated salary, but is it really convenient for them?’