Leeds United’s interest in Benfica midfielder Florentino Luís is all over the Portuguese media today.

On Tuesday, it was Italian website Tutto Mercato Web who reported the Whites chase for the player, claiming they had been in contact with the Eagles for the transfer.

Now there are three Portuguese newspapers who claim to have managed to confirm the information, and we’ve gathered what each one of them is saying about this pursuit.

The one with the biggest story is A Bola. They report that Leeds United are interested in signing Florentino on loan with an option to buy.

It’s said the Elland Road side are looking for a midfielder with his characteristics, and that’s why this ‘old interest’ for him is now back. 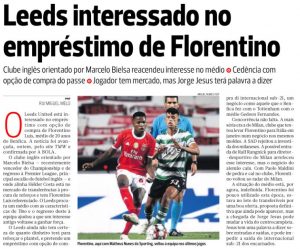 There’s heavy competition from Milan for the 20-year-old, and Benfica need to wait for Jorge Jesus’ arrival at the club so the new manager can decide whether Florentino should stay or go.

Record reports the chase as well, and writes that Leeds see Florentino as a ‘solution’ for their return to the Premier League. It’s said there have already been approaches from the English side in order to know the possibility of a deal.

Meanwhile, O Jogo is another one confirming the news, but claiming that there are no numbers on the table yet. Just like A Bola, they also point out the competition from Milan, as well as the importance of Jorge Jesus’ word on the player’s future.