While we know you are as bored of us of the Alexis Sánchez transfer saga, if you even want to call it that, we still feel obligated to bring you the latest if something new comes up.

This will be relatively short, but Gazzetta dello Sport have a big double page spread on the Chilean forward in their Tuesday paper, looking at how much impact he has had since coming back from the Covid-19 break.

Not only that, but they claim the player has found a ‘substantial agreement’ with Inter for a three-year deal, which would basically see him agree to an extra year on the contract he already has at Manchester United, set to expire in 2022.

That’s three years with a salary of €12m + bonuses that could see him reach €15m/year post tax, and Inter ‘would spread this figure in three seasons, revising for the benefit of the ‘Decreto Crescita’ that would reduce the impact on the budget of the Chilean’s wages’.

For those who aren’t aware, the Decreto Crescita ‘allows foreign workers to pay less tax on their wages (only 30%), thus making working in Italy far more appealing’.

If you want to learn more about it, we wrote an article back in June 2019 covering some of the details before it was put through. 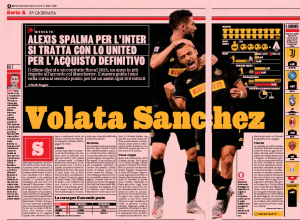 Either way, Sánchez has found himself an agreement with Inter, but now they need to find one with Manchester United.

Ed Woodward and co., perhaps aware that €20m was a bit much, have reportedly lowered their initial request to €15m, ‘and it will be difficult to drop it further’, since the accountants at the Premier League club have budgeted the Chilean for ‘a figure of around €15m’.

Unlike Chris Smalling and AS Roma, it feels like we might be getting somewhere with the whole Sánchez thing.