We have some interesting news coming out of Italy on Wednesday morning regarding Manchester United’s Romelu Lukaku, and no, it doesn’t involve Antonio Conte or Inter.

In fact, it’s Napoli who have joined the fray for the Belgian forward, as Carlo Ancelotti and co. try look to bolster their attack ahead of the coming season, and they could get some help from the government to get a transfer over the line.

The reason for this is a potential new law called the Decreto Crescita, which would allow foreign workers to pay less tax on their wages (only 30%), thus making working in Italy far more appealing.

Similar rules would apply to Italian citizens who have been working abroad for more than two years (like Antonio Conte) as they try and bring them home, giving them the tax break for the first five years of their return.

In the footballing world, however, this will mainly benefit the companies, or clubs, since they tend to pay their players’ taxes. 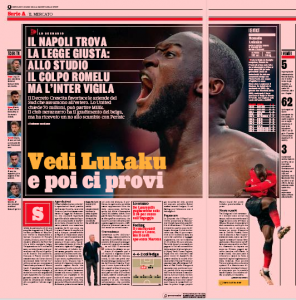 Furthermore, it is expected for clubs/companies/workers in the south of Italy (deemed the poorer part of the country) to get even greater benefits, paying just 10% tax on wages.

In Romelu Lukaku’s case, who would ask for a net salary of €10m/year, this would mean Napoli would “only” have to fork out a gross outlay of €11m/year, making a move for the Manchester United striker far more appealing and affordable.

Gazzetta dello Sport are the ones with all this information on Wednesday, and they claim the Serie A side could meet the Red Devils’ demands of €70m for the Belgian, paying the amount over four years.

In order to gather the required funds for the transfer, Napoli could sell their ‘unwanted’ crew of Elseid Hysaj, Simone Verdi, Adam Ounas, Luigi Sepe and Roberto Inglese, as well as potentially shipping off Arkadiusz Milik, whose spot would be taken by the Manchester United forward.

It’s all rather complicated, but the idea is there, as the Decreto Crescita would make Serie A a far more enticing league, allowing their clubs to offer higher wages to foreign players.

While this all sounds great, there’s the slight issue this might never happen, as this proposal needs to be ‘converted into law by June 29th’ or it runs the risk of being forfeited altogether.

It hasn’t been implemented yet, but it’s certainly something that could change the landscape of transfers if it does go through by the end of the month.

We will be keeping a close eye on it, rest assured.