Having arrived at Norwich City from KV Oostende last summer, Rocky Bushiri was sent out on loan to Blackpool in the same window.

The centre-back’s time with Blackpool was cut short in January and he joined Sint-Truiden on a temporary deal in the winter market.

Sint-Truiden wanted to extend the 20-year-old’s loan deal for the upcoming season.

However, that’s unlikely to be the case, after the club confirmed the Canaries owned player’s loan deal was terminated.

On June 18th, Het Belang van Limburg reported KV Mechelen are interested in the defender and Norwich are willing to do business with them.

Today’s edition of Het Nieuwsblad has a short update on Mechelen’s interest in the Belgium U21 international. 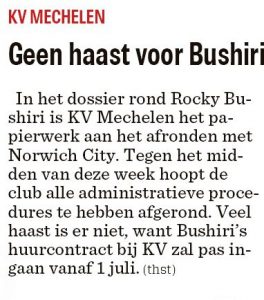 t’s claimed the Jupiler Pro League club are ‘finalising the paperwork’ with Daniel Farke’s side for Bushiri’s arrival. According to the report, Mechelen are hoping to complete all the administrative procedures this week.

Despite the optimism on timeframe, it’s made clear there’s no huge rush at the Belgian club, they just want it all done before July 1st.