Argentine giants River Plate are reportedly expecting another attempt from West Ham United for the signing of Gonzalo Montiel.

Newspaper Clarín is the one with a big story today saying that after rejecting an offer from the Hammers in January, the Buenos Aires side are now prepared for the second bid.

It’s said that due to Financial Fair Play problems, West Ham tried in January for a loan deal, with an option to buy the fullback in the summer for US$10m.

River Plate manager Marcelo Gallardo said at the time it would be ‘ridiculous’ for the club to even open talks for the transfer, so the Millonario decided to wait for a better bid.

Montiel’s agent Marcelo Carracedo has spoken to Clarin, and even he suggested that the Hammers should be back for the 23-year-old.

“They had already been interested in Gonzalo and continue to be, so they may appear in one of the upcoming markets. Now they have to see how the team ends this tournament and then resume negotiations,” said the representative. 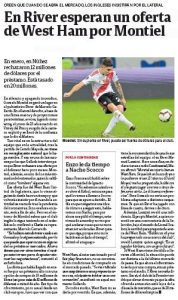 West Ham seem to have an important ally in this mission, which is former River Plate winger Manuel Lanzini.

Speaking to Radio Closs this week, the player has pushed for the the transfer, revealing that Montiel has already asked him about the Premier League side.

“Montiel would fit in well at West Ham. I know they looked for him and couldn’t bring him. The coach asked me, I talked to him and he likes to play with three or five defenders behind. I gave him good references.

“I spoke to him and he asked me questions about the club.”

Clarin writes that Montiel has a release clause of US$20m.