When Braga turned down Liverpool’s offer for defender David Carmo on Monday, many Portuguese outlets had quick stories about the rejection.

Now we finally get to know a few more details of it from the morning newspapers, as O Jogo brings a more complete article on it.

Their report says that one of the big reasons why Braga couldn’t take the offer is that it was made too late. There were few hours for the end of the transfer window, and no time to think about it.

The club consulted manager Carlos Carvalhal, and considering that they also lost Paulinho to Sporting on the same day, they decided to keep Carmo in the squad. 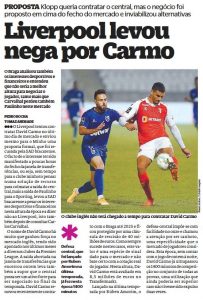 O Jogo points out that Carmo has been linked to several English clubs this season, and this rejection could be a sign that Braga are waiting to make more money with him in the summer transfer window.

The amount offered by Liverpool is yet to be revealed. The newspaper writes that the player’s release clause, which is of €40m, works more as a ‘sign’ for the transfer market, since he should not be worth that much.