The Portuguese press have been quite clear about Tottenham Hotspur’s €45m plus bonuses attempt to sign Luis Diaz this month.

Their slant is that the amount simply isn’t enough and the player himself isn’t too tempted by the prospect of joining Spurs, feeling he’ll have better options should he leave FC Porto in the summer.

It’s not too dissimilar to how they tried to sign Bruno Fernandes, before Manchester United beat them to it. Back then the Sporting president was so insulted by the Spurs offer, with bonuses based on the London club winning the Premier League and Champions League, that he spoke about it publicly.

Despite all of that, it doesn’t appear Porto have yet officially rejected the Tottenham approach.

O Jogo reports the Portuguese club are ‘analysing the formal proposal’ they’ve received from Spurs. The newspaper says the offer, which could go above €50m if the bonus targets are met, falls short of the kind of fee Porto were expecting to get for the Colombian. 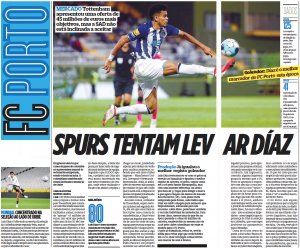 And then O Jogo get to the crux of the matter… Luis Diaz isn’t interested.

It’s said he doesn’t want to leave Porto now, wanting to fight for the title this season, and would rather wait for better opportunities.

O Jogo state: ‘In fact, the winger’s ambitions do not involve moving to a club that is not even playing in European competitions.’