The nearer we approach the end of the transfer window, the less time Aston Villa have to make a move for Rodrigo Bentancur.

That might sound like the most obvious thing in the world, but it’s one football clubs often seem to forget, which is why it isn’t surprising to see a couple of claims that Steven Gerrard’s side are starting to gear up for an offer for the Juventus midfielder.

The first comes from Corriere dello Sport, who say that Aston Villa are ‘ready to land the lunge for Bentancur’, with a fee of €20m planned for the Uruguayan, whom the Villans’ manager ‘likes so much’.

They do, however, point out that, to date, ‘the player has not yet opened the option to move to Birmingham, despite the fact that he looks favourably on an experience in the English league’.

The second is from Corriere Torino, who point out that ‘Aston Villa’s reflections on Bentancur are turning into an offer in the process of being defined, which should have a base of €20m + bonuses’. 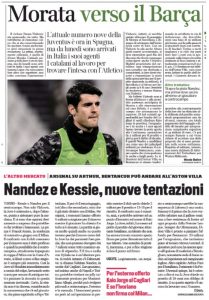 Once that comes in, ‘the ball will be passed to the player (not so convinced to leave Turin mid-season) and then to the club, who also have to deal with the percentage of a future resale destined for Boca Juniors, currently standing between 35-40%’.

That’s something they really need to consider, because 40% on a €20m fee means only €12m goes into Juventus’ coffers, with €8m going to the Argentine side.

It now all depends how desperate they are, and if they can find a replacement, with Nahitan Nandez reportedly being looked at.