Home Europe Over to Claude Puel to be reasonable as talks over Leicester City...
SHARE

Manuel Silva, father and agent of Leicester City midfielder Adrien, spoke to both the French and Portuguese media last week.

To the French media he revealed offers from France, Italy and Spain for a January transfer, and explained that whilst Adrien completely respected the opinion of Claude Puel, he feels it’s best to move on this month.

To the Portuguese media, Manuel really let rip. He made it sound like there’s very much a personal issue between manager and player and that’s leading to unfair treatment from the Leicester boss.

“We have a coach who is picking on the player and who is cutting his legs, does not summon him to the games and at this stage when the market is open he could be loaned with the option to buy and he doesn’t let him leave,” Manuel Silva told A Bola. “The coach now says he counts on him, but lets him go and train with the under-23s several times. Adrien respects the club and the orders that are given, but it’s time to clarify this situation.

“If they do not bet on him so loan him out, because he has proposals from some European clubs, among them French, which seems to be annoying Claude Puel. It is unfortunate what is happening, we are talking about a European champion and that if you do not play at your club you shouldn’t also be able to represent Portugal.” 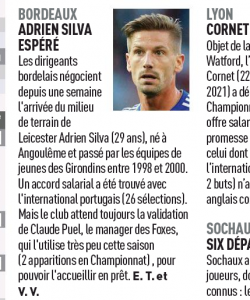 Sunday’s edition of L’Equipe reports that Bordeaux have been in talks for a week to make the signing during the current market, likely to be initially on loan, and it seems Leicester are happy to do the deal.

Things are getting serious, and the French side have now reached a personal terms agreement with the player, however, before the move can be completed, it’s explained that Puel himself has to give the green light.

If he doesn’t, this is going to start looking very odd indeed.