No matter how many times Antonio Conte repeats to the press that he wants to remain at Chelsea beyond this season to see his team go to the Champions League after a great first season in charge at Stamford Bridge, the Italian media will continue to try and send him back to his home country.

Inter’s 5-4 loss to Fiorentina on Saturday did nothing to help the rumours go away, and Gazzetta dello Sport on Monday report the Serie A side are prepared to do pretty much everything in their power to bring the Chelsea manager to San Siro next season. 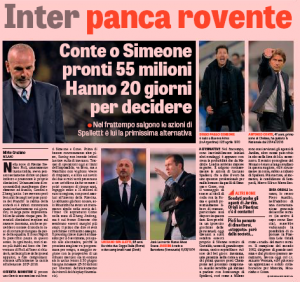 The top two candidates to replace Stefano Pioli next season are Conte and Diego Simeone, and while the latter of the two seems the most likely to say yes, whoever gives their agreement first will get the job.

Gazzetta explain Inter Milan’s new owners Suning are ready to offer the candidates a lucrative five-year contract worth €11m a season, which is enough money to turn most heads in the managerial world.

Furthermore, the club are prepared to give the new manager full power over all matters, something Inter Milan have not allowed since a certain José Mourinho was in charge at San Siro.

Roma’s Luciano Spalletti and Monaco’s Leonardo Jardim are also two men the Serie A side are considering, but while they have their advantages, neither compete with Simeone and Conte at this moment in time.

Until Pioli is sacked and someone other than the current Chelsea manager takes his place, these stories will continue to appear, and the more Pioli stays, the more ludicrous they are likely to be.