The 27-year-old has spoken to Vatan about his future with saying: ”I’ve been at this club for 6 years. People know me as ‘Fenerbahçe’s Hasan Ali’. That’s a great thing for me. It’s normal that I’ve been receiving offers from other clubs because I am playing for Turkey’s biggest club.

“But none of these offers matters to me right now. I am only focused on my team. We have a Turkish Cup to play and we have to clinch the 2nd place first.”

Kaldirim also added: ”My contract is not a problem. I want to stay at Fenerbahçe for many more years. We’ll talk with the board at the end of the season. I am confident we’ll find an agreement. I am relaxed about the situation.”

Earlier this year it was calmed Celtic were ready to offer him a £1 million signing fee, with Brendan Rodgers seeing Hasan Ali as a good alternative to Emmanuel Izaguirre.

The Scottish Premiership side had held talks with the player’s agent to join the club in the summer window, and there were recent reports they were still interested. 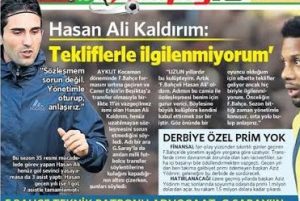 West Ham are also reported to showing a keen interest in Hasan Ali, but nothing is clear on his future yet.

West Ham manager Bilic knows the player well since his time managing in Turkey, and could look to move in on the player in the next window.