Earlier on Monday, we published a story from Gazzetta dello Sport claiming that Inter Milan were ready to throw the kitchen sink at Chelsea to get Antonio Conte as their manager next season.

They claim Inter have given up on Conte, and are looking at three other candidates, including Hull City’s Marco Silva.

Beating Watford 2-0 on Saturday, the Tigers moved one step closer to safety in the Premier League, as Marco Silva continues to lead the Great Escape at the KCOM Stadium since taking over from Mike Phelan. 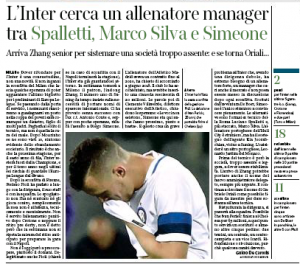 The Portuguese manager has impressed all of Europe with his daring football at a club that was rock bottom when he took over, and Inter Milan are now said to have put him on their three man shortlist alongside renowned names such as Diego Simeone and Luciano Spalletti.

As previously explained, the catalyst in this story is a certain Kia Joorabchian, who has whispered the Hull manager’s name to those in charge at Inter Milan, thanks to his close relationship to the Suning Group at Inter Milan.

Far more realistic than Antonio Conte, were Marco Silva to keep Hull up, an Inter Milan offer for his services wouldn’t be surprising in the summer.

Whether he would want to join a club who go from manager to manager as often as someone changes the oil in their car when he has the full backing of a Premier League side behind him, however, remains to be seen.