On Wednesday afternoon, we relayed an article from Calciomercato.com that Juan Cuadrado had said ‘yes’ to Juventus’ advances regarding a return to Turin.

The Serie A champions were keen to bring the Colombian back into their squad after his excellent performances last season, and Chelsea fans should probably prepare to see the back of him as Gazzetta dello Sport report the deal is ‘practically done’.

The Italian newspaper go with the headline “Juventus party to… Cuadrado”, heavily hinting very little stands in the way of the player returning; something that was made clear by Beppe Marotta on Wednesday, relayed by Gazzetta. 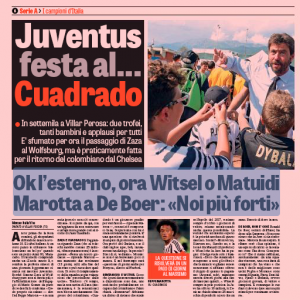 He said: “Cuadrado is a player welcomed for various reasons. With us, he behaved well, our experience with him was extremely positive. It’s a question that will be resolved in the next couple of days max. For now, he’s at Chelsea. If the club is open to it, well, we’ll start talking. A loan? I’d say yes, we’ll see.”

It’s not 100% done, but if Marotta is talking so openly about it, it’s probably because he believes a deal can be done with Chelsea and Antonio Conte, who would ideally like to keep the Colombian.

Cuadrado struggled to adapt to the Premier League under José Mourinho, and his loan to Juventus last season showed how much he prefers Serie A football.

For his sake, and everyone else’s, it’s probably best Chelsea allow him to return.