On November 25th, Mundo Deportivo reported Chelsea are one of the sides interested in Barcelona’s Ronald Araújo.

The defender’s current deal runs down in 2023 and while the La Liga side try to secure his long-term future, he continues to attract attention from the Premier League.

That’s according to Sport, who say the west London club ‘have him in their sights’. At the Camp Nou, they are aware of the ‘enormous interest’ from Thomas Tuchel’s side, due to his ‘physical characteristics’.

The Champions League winners are ‘ready to take the step next summer’, when the Uruguay international will have a year left on his contract. They will be in a position to offer a better package to the centre-back, than what the Spanish club can propose.

Araújo’s situation seemed to have been under control a few weeks ago, but with Chelsea’s interest, and Liverpool also in the picture, Barca are clear they have to fine-tune their efforts to tie him to a new deal.

The South American arrived at La Masia in 2018 and went on to make his first team debut a year later. The player has the potential to become ‘one of the best centre-backs’ in the world.

Ramon Planes, who brought him to Barca, is no longer at the club. Mateu Alemany is leading the renewal talks and wants to ‘immediately summon’ Araújo’s agent, knowing that prolonging the negotiations ‘would be a serious mistake’ from the club. 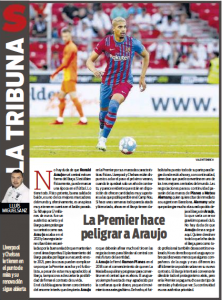 Araújo’s desire is to continue with the Catalan club, but  he wants to feel valued as he ‘almost earns ten times less’ than his teammates.

He can earn more in England, where there is ‘enormous interest’ from Chelsea.