Vivianne Miedema has a special place in the hearts of Arsenal WFC supporters.

Signing for the club in 2017 from Bayern Munich, the 25-year-old has gone on to become a world star, and a player the Gunners are very proud of.

On Monday evening she came fourth in the Ballon d’Or, on equal points (46) with Chelsea’s Samatha Kerr, but far behind the Barcelona pair of Alexia Putellas and Jennifer Hermoso, who finished first and second respectively.

It came just after she’d been named BBC Women’s Footballer of the Year 2021, having finished second in that competition a year earlier.

There’s plenty of time for Miedema to win the Ballon d’Or, yet to do that she may need to be successful in the final stages of the Champions League.

De Telegraaf, a Dutch newspaper, now suggest that such glory could come away from Arsenal. In their Tuesday edition, they state ‘top clubs are currently lining up’ for the striker, and that Miedema has a personal ambition to ‘shine’ in the Champions League. 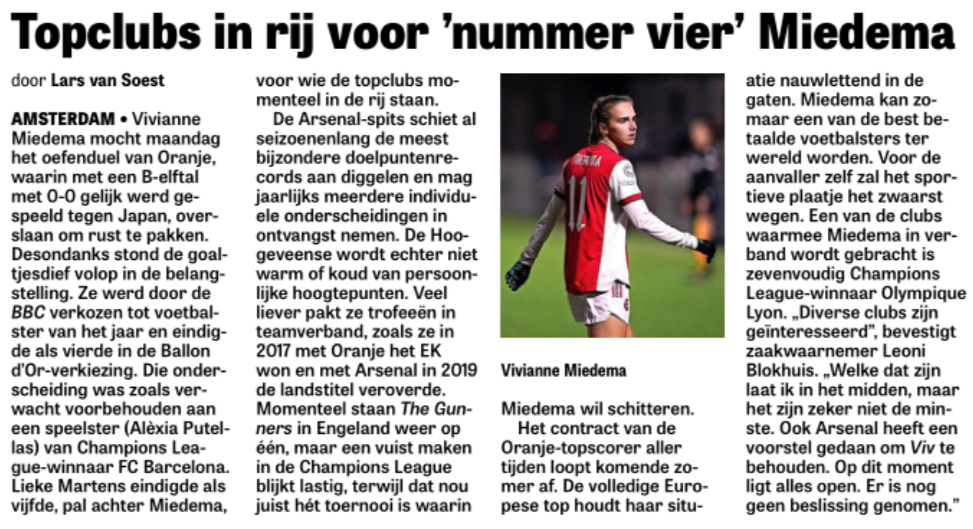 Given her contract at Arsenal expires next summer, De Telegraaf insist she ‘could easily become one of the highest paid football players in the world’.

Miedema’s agent Leoni Blokhuis is quoted as saying: “Various clubs are interested, I’ll leave it up to you which ones they are, but they are certainly not small. Arsenal have also made a proposal to keep Viv. Everything is open at the moment. No decision has been made yet.”